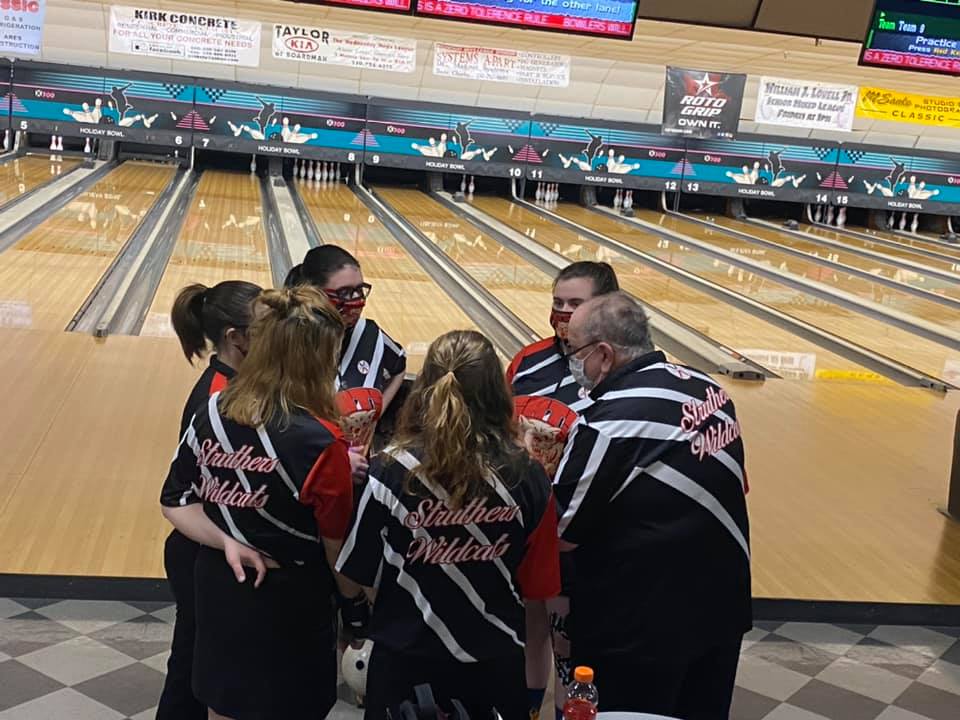 Wildcat Bowling squads compete in NE8 conference tournament
The Struthers Wildcat bowling squads competed in the Northeast8 Conference Bowling tournament, held at Holiday Bowl, on February 15, 2021. Both boys and girls varsity squads would compete in a 2-game, 5 Baker game format. Total pinfall would win the conference tournament champion trophy. Tournament MVP would also be announced for the individual boy and girl with the highest 2-game total.
The LadyCats opened their day in 2nd place, with an 803 game, led by Madison Stanton’s 205. She was followed by Mary Williams’s 165, with Karla Martinez rolling a 156. Hailey DeGenaro notched a 151, and Mackinzie Allen, a 126. In game2, the LadyCats took a 5 pin lead over the Hubbard LadyEagles with an 889 team effort. Madison Stanton paced again with her 212. Mary Williams added a 200 game, followed by Hailey DeGenaro’s 167, and Karla Martinez’s 162. Mackinzie Allen rolled a 148. Madison Stanton led all ladies, and earned tournament MVP honors with her 417 set. Mary Williams was next, and 4th overall with her 365 set. Hailey DeGenaro and Karla Martinez tied at 7th place, as they both rolled to 318 sets. Mackinzie Allen notched 11th, with her 274 set. In the Baker round, the LadyCats rolled an 818 set, with games of 155, 200, 182, 137, and 144. Their final pincount was 2510, and a second place finish.
Next up for the Wildcat bowling squads, a makeup, regular season match with the Girard Indians on Wednesday 2/17/21 at Holiday Bowl. This will be varsity only as Girard does not have JV squads.